The first ANZAC memorial in the Commonwealth

On Wattle Day, 7 September 1915, the Dardanelles Cenotaph was unveiled in Adelaide's South Parklands by the Australian Governor-General, Sir Munro Ferguson, who stated, "this inititaive had caused Adelaide to be the first city, in the Commonwealth, to erect a memorial to the landing of the troops at Gallipoli."

The word ANZAC was not yet part of popular lexicon and the inscription on the Cenotaph commemorates Australasian Soldiers.

Rather than a memorial to war the Cenotaph is a substitute head stone where family members could mourn their dead whose bodies never came home.

The Dardanelles Cenotaph was erected and funded by the Wattle Day League and located in an area known as Wattle Grove. The plan was for a Wattle tree to be planted for each dead soldier. This was kept up for many years but during the 1940s the area had fallen into disrepair and the Cenotaoh was moved to it's current location in the Lundie Gardens, South Terrace, Adelaide.

The Dardanelles Cenotaph has been a neglected memorial for many years, but a remembrance service was held on 7 Sept 2014 to commemorate the 99th anniversary. This photograph combines the 1915 unveiling with the anniversary service. 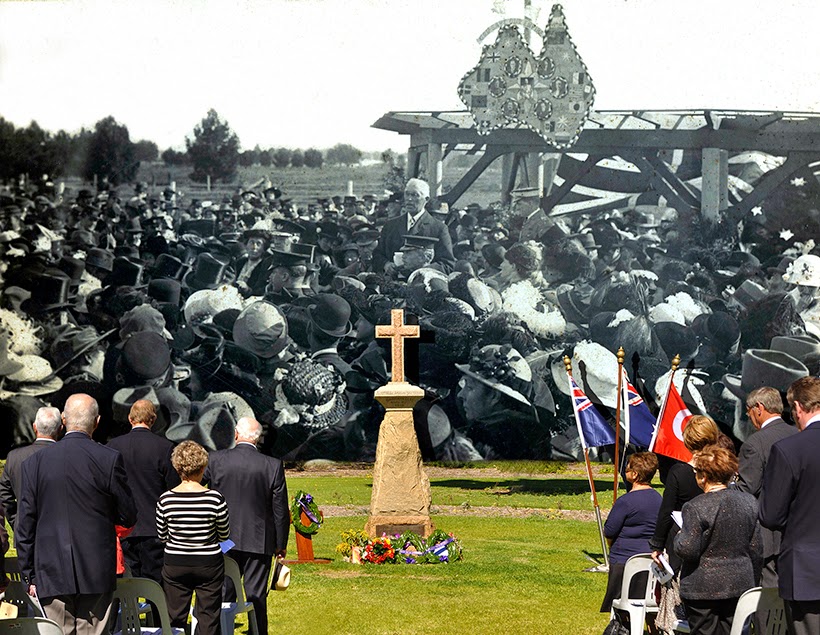