On the 13th of October 1915 Adelaide’s Eight Hour Day was renamed Anzac Day for one year. All proceeds were donated to the Wounded Soldiers Fund.  A contest had been run to choose a suitable name to honour the soldiers fighting in the Dardanelles.  Anzac Day was chosen, it had been submitted by a Prospect draper, Robert Wheeler. This event was the first time the words 'Anzac Day' were used.
A huge procession featured 13 car loads of wounded veterans home from Gallipoli and nearly 5000 AIF soldiers who were about to leave for the war marched.
After the procession a crowd of 20,000 gathered at Adelaide Oval for an afternoon of entertainment and sporting events. The day culminated with two obsolete horse drawn trams being crashed into each other and exploded. This had been heavily advertised and billed as 'American style entertainment'. Novel elements such as the tram crash were included to attract a large crowd who would hopefully donate to the Wounded Soldiers Fund.
This photograph of the troops marching in the procession was published in The Adelaide Chronicle.
If you'd like to stay informed about The First Anzac Day documentary
please follow this page or
Click here to email Ash Starkey. 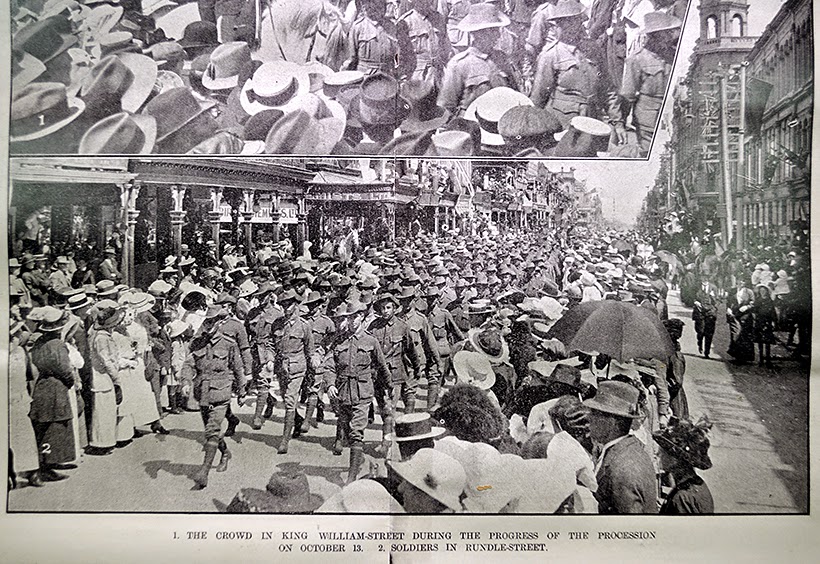